Turn, Turn, Turn Your Life Around 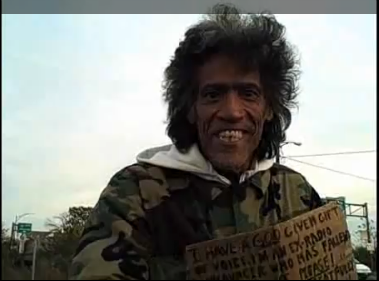 Ted Williams working the street to get his radio job

Unhappy with where you are in life?  Screw up at some point?

This homeless guy just turned the corner into a good life — he’s been sober for two and a half years, and standing roadside in Ohio with a small, hand-lettered sign doing voice-over, radio-announcer style for anyone who would listen.  And someone did.  And put the video of him up on YouTube.  Two days ago.  And now he has a job with the Cleveland Cavaliers.  And his own house.  And he’s going back home, no kidding, to visit his mom, who is 92.  He’s been praying he would live and she would live long enough for her to see him do well with his life.  And being a voice-over artist has been his dream since he was 14.  He’s 53 now.  Rock on, man!

Ted Williams, the man with the golden voice, in the video that “discovered” him:

And his tv news interview two days later:If at first you don’t succeed, keep kickin’ it until you do.  Be open to changes in your plan, be open to the Divine making miracles unfold before you, but keep taking action.  There is a right time for everything, just as Ecclesiastes, Pete Seger, and the Byrds say in this great song: